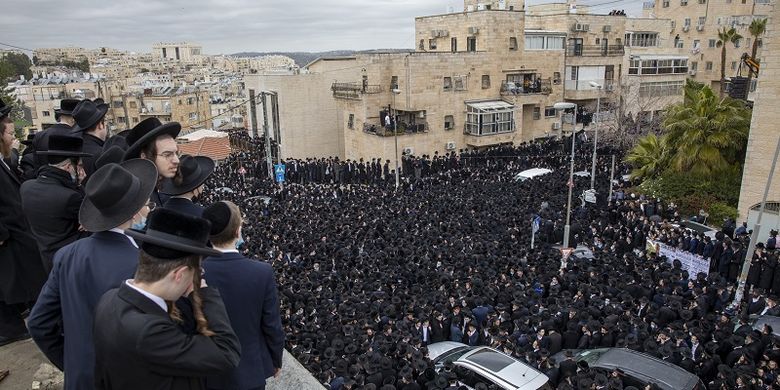 YERUSALEM, KOMPAS.com – Thousands of ultra-orthodox Israelis crowded into the funerals of two prominent Jewish rabbis in Jerusalem on Sunday, overruling a ban on large public gatherings during the pandemic.

Launch Associated Press (AP), the funeral of Rabbi Meshulam Soloveitchik who died at the age of 99 makes the streets of Jerusalem seem congested.

A recent view of ultra-orthodox Israel refusing to respect boundary restrictions during the pandemic.

Two of Netanyahu’s challengers accused the leader of failing to enforce the law due to political pressure from his ultra-orthodox allies.

Crowds of people gathered outside the rabbi’s house, ignoring rules to limit public gatherings outdoors to more than 10 people.

Many also do not wear face masks. Thousands of visitors to the ultra-orthodox funeral wearing black robes headed for the site where rabbi Soloveitchik was to be buried

A number of police blocked traffic to allow the crowd to pass and did not appear to have taken any precautions regarding the illegal gathering.

Israeli media said Soloveitchik, a prominent Jewish rabbi who heads a number of well-known seminaries, had recently suffered from Covid-19.

Also read: The mystery of the 2,500 year old Jewish royal palace in Jerusalem

Apart from Soloveitchik, on Sunday night, thousands of ultra-Orthodox mourners also attended the funeral of another respected rabbi, Yitzhok Scheiner who died at the age of 98 also died of Covid-19.

Alon Halfon, a Jerusalem police official, told Channel 13 TV that the police had little choice but to allow the massive procession for Soloveitchik to continue.

He said police actions had helped reduce crowding and about 100 charges had been issued for health offenses.

But in such a crowded environment, with children in the crowd, trying to disperse the crowd would be “unwise and dangerous.”

Israel’s Ministry of Health has recorded more than 640,000 confirmed cases of Covid-19 infection and at least 4,745 deaths since the start of the pandemic.

Israel recently recorded an average of more than 6,000 confirmed cases of coronavirus infection every day, one of the highest infection rates in a developing country.

At the same time, Israel has vaccinated more than 3 million of its citizens, also one of the highest per capita rates in the world.

Also read: The Story of a Nazi Stealing a Cookbook from a Jewish Chef